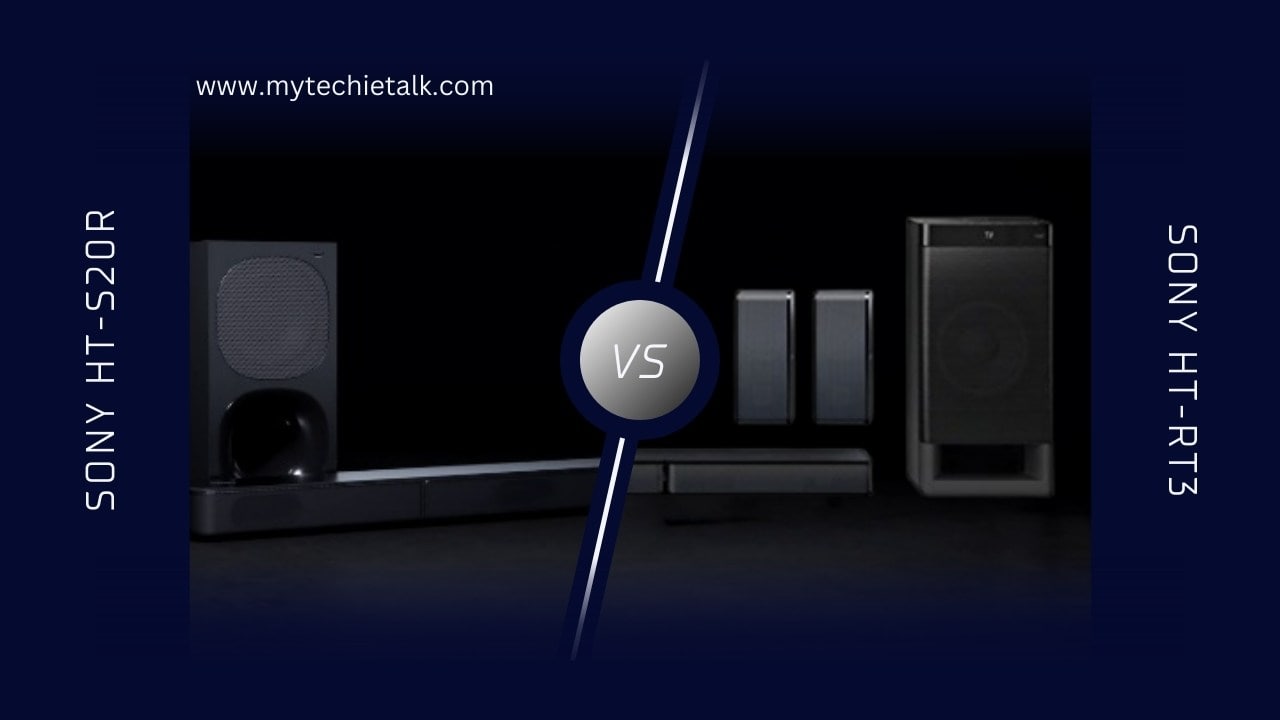 Recreate the magic with Sony soundbars

Sony is known to deliver the best quality soundbars, earphones, and other electronic products, come rain and shine.

And that is why today, Sony is the choice of millions of customers with the 4th highest contributions to global sales.

Are you acquainted with the heated debate about two gleaming Sony HT-S20R vs Sony HT-RT3 Soundbars?

You can say that again!

Hundreds of users are sitting on the fence (Unclear) about choosing between two efficient, classy, and eminent Sony HT-S20R and Sony HT-RT3 soundbars.

Are you jumping on the bandwagon?

If yes! Then you have reached the right place.

This article comprises a detailed comparison of Which is better, Sony HT-S20R vs Sony HT-RT3, as both are highly-demandable in the market, with multiple features and functions.

So, if you are in a dilemma of which soundbar can be the show for your Netflix or Amazon original series, then stick with us.

Before jumping on to the comparison of Sony HT-S20R vs Sony HT-RT3, let’s get some brief details about both.

What’s in the box

Get a real-time movie soundtrack with a 5.1 surround sound channel of Sony HT-S20R. The 3-inch soundbar works with an external subwoofer and rear speakers to deliver dynamic, immersive, cinematic sound.

Over that, Dolby Digital offers a dramatic, high-quality sound.

The 400-watt power output and seamless Bluetooth connectivity offer every movie the thrilling soundscape it deserves.

Not only that, you can connect the subwoofer via wired connectivity modes like HDMI, ARC, and Micro USB cables.

You can tune the Sony HT-S20R on your actions with a universal remote control that allows auto standard, cinema or music, night, and voice modes for entertainment.

Don’t worry about the installation of the Sony HT-S20R. It’s a child’s play to set up.

All you need to do is wire up the external subwoofer and rear speakers, plug in the speaker, and you are all set to go.

What’s in the box

Immerse yourself with thrilling musical sound with the 5.1 channel surround sound of Sony HT-RT3.

The 600-watt power output delivers a thrilling soundscape to your music, movie, or entertainment experience.

Whether it’s movie, sports, music, or games, the combination of Sony HT-RT3 soundbar and speakers delivers balanced audio, whereas the external subwoofer is the liege lord of high-quality bass.

Setting up the soundbar to multiple connectivity options is relatively easy to use, and enjoy the Sony HT-RT3.

Besides, that is not only wired, the NFC (Near Field Communication) technology allows the wireless connectivity of the Sony soundbar.

Both the Sony soundbar are highly popular and efficient. Both differ in multiple features, but both have a few similarities.

Let’s check out what makes both the models (Sony HT-S20R and Sony HT-RT3) similar and different from each other.

That leads to the louder sound of the Sony HT-RT3.

Both the Sony HT-S20R and Sony HT-RT3 vary in design and body weight.

The Sony HT-S20R has a plain sleek body and smooth edges with a body weight of 13Kg.

On the other hand, Sony HT-RT3 has sharp cutting edges and weighs 11Kg.

There are a lot of similarities between both models.

Both the Sony HT-S20R and Sony HT-RT3 soundbar accommodates a 5.1 channel with Dolby Digital for a dynamic and cinematic sound experience.

In both the units, along with multiple watching, listening, and auto standard, you can enjoy the night and voice modes as well.

You can experience quality and clarity in sound by setting the night mode on.

In both units, you don’t have to worry about the connectivity, as along with wired, get easy-peasy wireless Bluetooth connectivity.

Is the sound quality good at low volume?

Undoubtedly yes! Sound quality is much more precise and better at low volume. If you are more of a low-volume person, then Sony HT-S20R is a good choice.

No, the soundbars do not have an FM radio feature.

Does any of the Sony HT-S20R and Sony HT-RT3 soundbars have wall mounting options?

No. Sony HT-S20R is floor mountable; on the other hand, the Sony HT-RT3 soundbar is a tabletop one. If you want them to be wall mount, you can hand them on nails.

Is the soundbar good for gaming?

If you are hunting down a soundbar precisely for gaming, you should go for another one, But Sony HT-S20R or Sony HT-RT3 is not that bad for regular gaming sessions, and normal gamers can use them.

How long does the soundbar last?

On average, the soundbar lasts long for 6-16 years, and it depends on the maintenance of the soundbar.

Conclusion- Sony HT-S20R vs Sony HT-RT3 Which one is better?

We have mentioned all the significant differences and similarities in both Sony HT-S20R and Sony HT-RT3.

If you hunt for more power output and sound, then Sony HT-RT3 is a better choice you can go with.

But, if you are looking for a slightly low volume and want to enjoy thrilling gaming and movie sessions at a cheaper price, then Sony HT-S20R would be a more comfortable option for you.

Welcome to My Techie Talk. My Techie Talk is A Tech Reviews And Comparison blog. my techie talk helps you to choose the right product. we are review every day a new product, you can check our blog every day & read the latest articles